Videos From May Day New Haven

David Montgomery Talks About May Day

As part of the day of May Day Boycott of 2006, thousands of immigrants and supporters marched through New Haven streets.

Thousands go silent to observe the "Die-in" protest on the New Haven Green to protest The War, May Day 2006.

As part of the annual May Day demonstration, children and adults dance around the Maypole, New Haven 2006.

When Howard Zinn Spoke at May Day New Haven

May Day 2007 in New Haven: famed historian and anti-war activist Howard Zinn speaks at the May Day festival.

Wilhelm Speaks at May Day

John Wilhelm, President of UNITE***HERE, speaks at the 2006 May Day celebration on the New Haven Green. 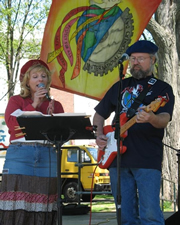